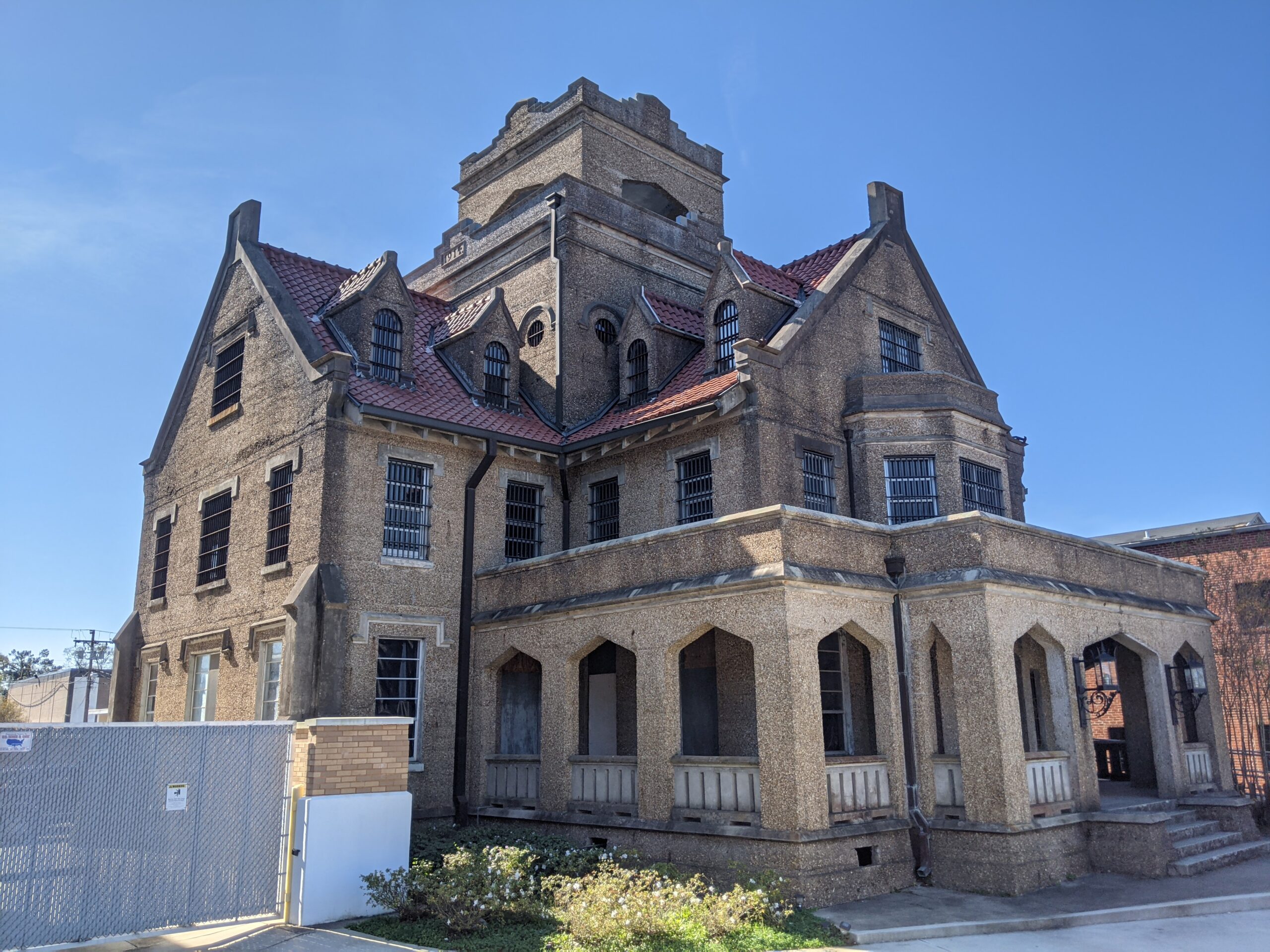 The Louisiana Trust for Historic Preservation is now accepting nominations for its annual list of Most Endangered Places and honorees for the Louisiana Preservation Awards for 2022.   Each year historic sites threatened for various reasons such as demolition, neglect, funding, etc are selected to the Most Endangered List to bring awareness and attention to […]

Louisiana Trust is proud to partner with the LA Main Street Program on the Paul Bruhn Historic Revitalization Subgrant Program in transforming vacant or underutilized buildings in Louisiana’s Main Street communities. Major funding for this program comes from the National Park Service, and LTHP will hold and monitor a ten-year preservation easement as part of […] 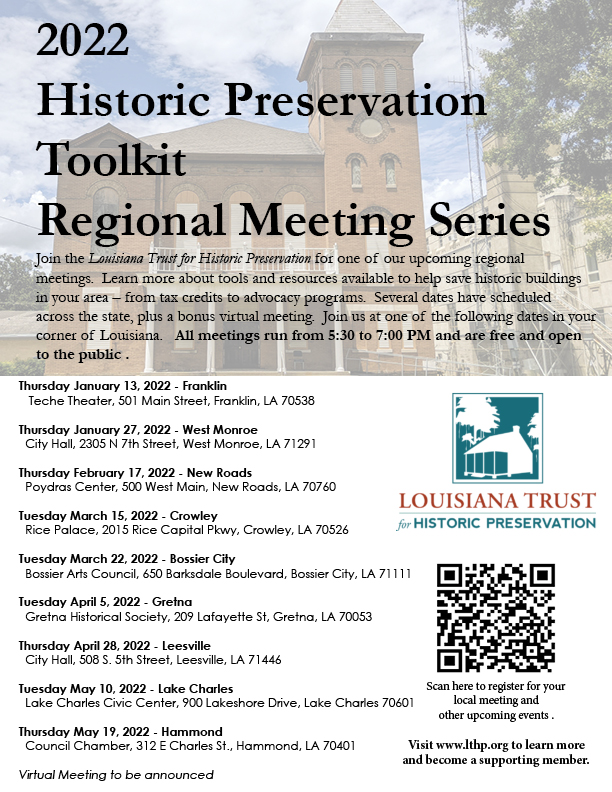 Join the Louisiana Trust for Historic Preservation for one of our upcoming regional meetings. Learn more about tools and resources available to help save historic places in your backyard – from tax credits to advocacy programs. Several dates have scheduled across the state, plus a bonus virtual meeting. Join us at one of the following […] 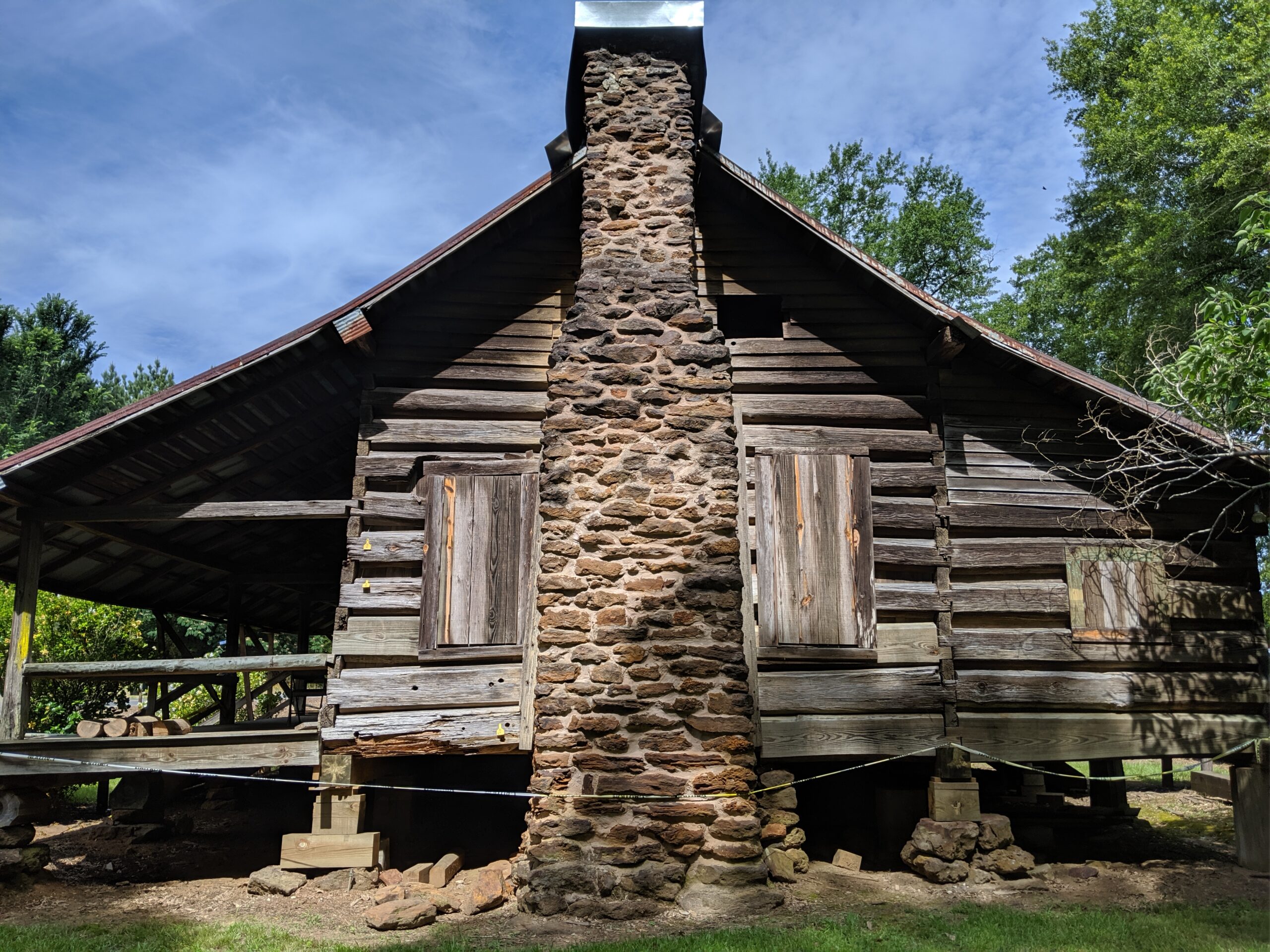 MEP Update on the Autrey House, Dubach A North Louisiana Log Dogtrot Home By Amanda R. Lanata   Some of the earliest settlers of Lincoln Parish built this log dogtrot home in 1849. Remarkably intact but facing serious foundation problems, it was listed as a Most Endangered Place in 2019. Very few Louisiana dogtrot houses […]

You or your company can help support historic preservation in Louisiana by donating for our first ever online auction fundraiser! After the second postponement of LTHP’s annual conference and ramble, our traditional silent auction is going virtual later this fall.  Nearly a dozen items have already been lined up and additional items are being accepted […] 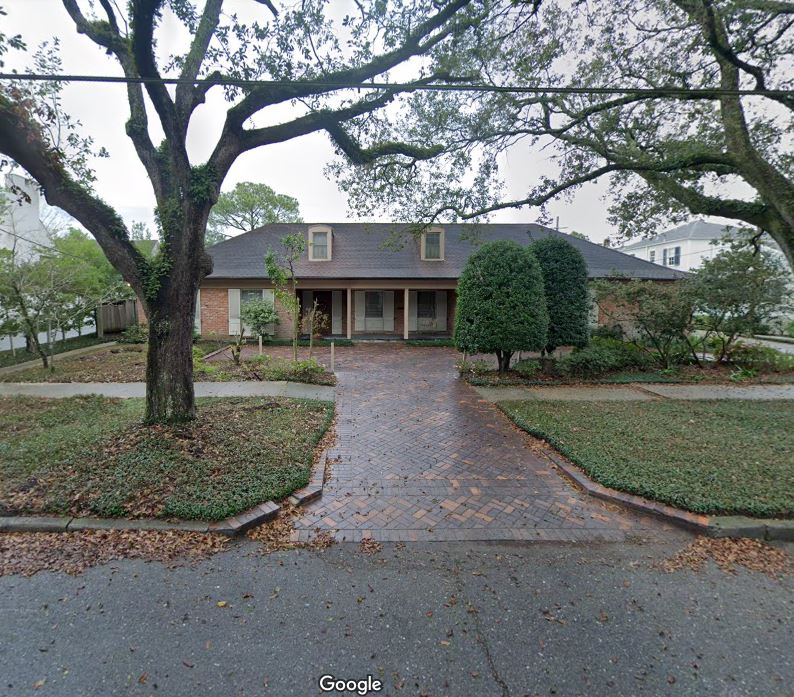 We received a notice from Susan Johnson, a preservationists in New Orleans, that a 1962 residence designed by Louisiana Mid-Century Modern architect George J. Riehl (of the firm Benson and Riehl) is scheduled for demolition at 1441 State Street.  Riehl designed the California Building and the Saratoga Building in downtown New Orleans—commercial buildings that were both […] 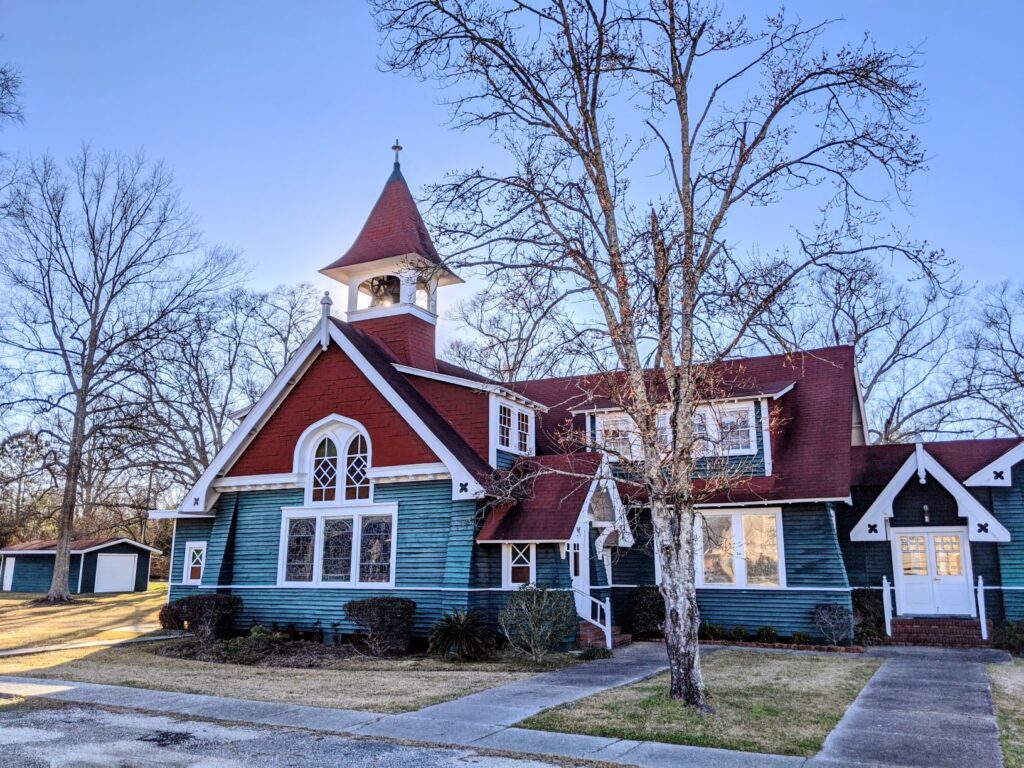 Out of an abundance of caution, the board of the Louisiana Trust for Historic Preservation has decided to postpone its upcoming fall events: 41st Annual Louisiana Preservation Conference in Monroe & West Monroe and the Fall 2021 Ramble in Bogalusa. Due to the rising cases of Covid-19 and the Delta Variant nationwide and particularly in […] 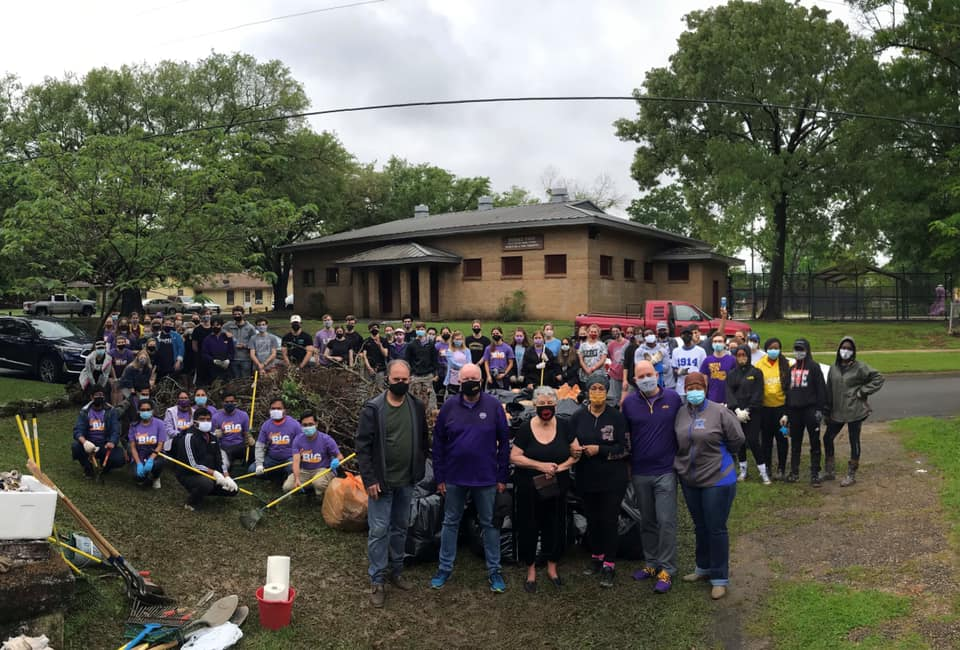 By Amanda R. Lanata, LTHP volunteer On a warm afternoon recently, I met Lillie Gallagher and Matt Thomas at the Lutheran Benevolent Society Cemetery on Eddie Robinson Sr Drive in Baton Rouge. We toured the six-acre cemetery, a beautiful tree-shaded spot across the street from the Brooks Park swimming pool. Though I could see McKinley […]

Announcing the 2021 Louisiana Preservation Awards Baton Rouge, LA – Louisiana is filled with great places, great traditions, and great people keeping those cultural assets alive.       The Louisiana Trust for Historic Preservation recognizes 11 new award recipients for their impact on historic places, build pride and foster engagement in their communities. Awardees have been nominated by the public and selected based on   […]

Announcing the 2021 Most Endangered Places 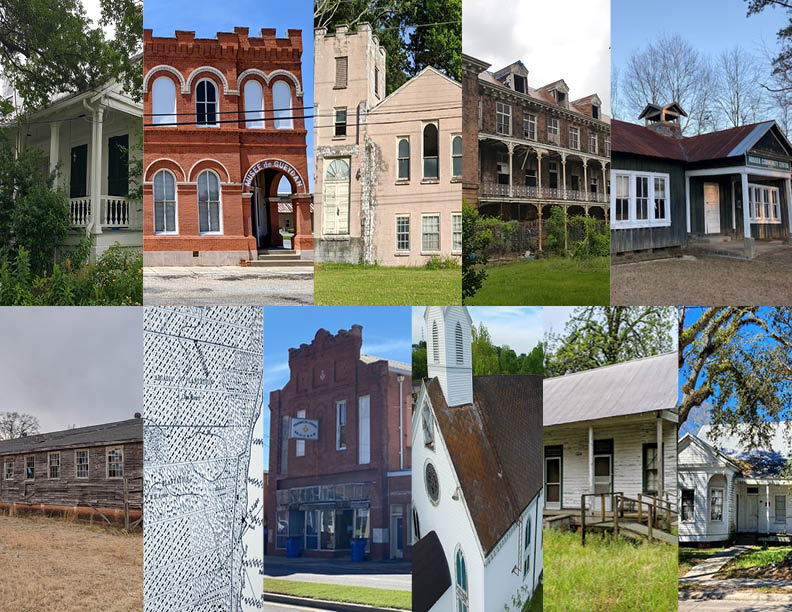 Announcing the 2021 Louisiana Most Endangered Places For Immediate Release Baton Rouge, LA - Louisiana is known for its rich history and cultural diversity.  Louisiana’s historic sites represent the past, but often these sites become neglected, abandoned, or ultimately demolished.  The Louisiana Trust for Historic Preservation works statewide to help identify and advocate for our state’s historic […]