Some of the earliest settlers of Lincoln Parish built this log dogtrot home in 1849. Remarkably intact but facing serious foundation problems, it was listed as a Most Endangered Place in 2019. Very few Louisiana dogtrot houses of this period survive today—many were modified by enclosing the open dogtrot corridor, adding siding, or relocating the structure. Not the Autrey House. It’s never even had running water. “What we now consider as comfortable living was not easily obtainable with log construction of this age, so these homes were often abandoned, used for farm tasks or replaced with a more modern house,” said Brian Davis, Executive Director of the Louisiana Trust for Historic Preservation.

Absalom Autrey and his family moved from Alabama in 1848, crossing Bird Creek on Christmas Eve. They built a temporary shelter and then got to work felling trees and splitting logs to construct the house. The family cleared land to plant corn and cotton for cash crops, while hunting and fishing supplemented their vegetable garden and livestock. Family records indicate that one or two enslaved people were brought with the family from Alabama, and another may have come when Absalom married his second wife.

The log dogtrot remained a family home until the death of the youngest son, Charlie Henry Autrey, in 1918. The family sold the property, which became a rental house until the 1970s. Nearly reclaimed by the surrounding forest while vacant, the Autrey House was donated to the Lincoln Parish Museum in the 1990s. Autrey family descendants are active in the site’s future, with the William Davis Green Foundation (a direct descendant) providing major support for recent restoration projects.

In 2018, historic contractor Jean Becnel confirmed that the hand-hewn timbers in the foundation were compromised by powder post beetles and dry rot. However the 2018–2019 foundation stabilization project revealed that the damage was more extensive than anticipated. “We found that timbers that looked okay on the outside were actually shredded on the inside from dry rot and termites,” said Jean Moore, chairman of the Autrey House Preservation Committee. This hidden damage doubled the cost of the project. Workers added new concrete-block footings to support new joists and beams. Leveling the house created gaps in the floorboards, which Moore and the committee will tackle next. They also installed temporary metal covers over the two chimneys to prevent rainwater intrusion and mortar deterioration. Eventually the committee plans to rebuild both chimneys (the east chimney made of local ironstone is original to the house). 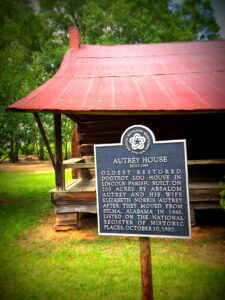 The house is certainly significant for its architecture, but Moore suggests that it’s about more than that: “No one became president of the US, but many were prominent community leaders, so the Autrey family is a great representative of the pioneers who came here. They were devoted to their families, their churches, their schools—they built the school house across the road. This place is significant for what the family represents and what the house represents.”