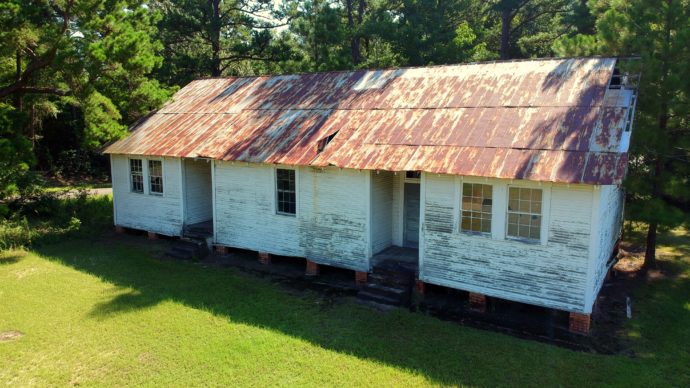 Baton Rouge, LA – In the early 20th century, a partnership between Booker T. Washington of the Tuskegee Institute and Julius Rosenwald, president of Sears & Roebuck, built thousands of schools for African American children in the rural areas of the South.  Louisiana saw 442 of those 5400 school buildings constructed, with grants from Rosenwald and matching support from the local communities where they were built. Following desegregation, many of the schools were abandoned or demolished. The Louisiana Trust for Historic Preservation (LTHP) has launched a new effort to identify and document the locations of these historic buildings (as well as those that have been lost) throughout the state.

Rosenwald Schools were primarily located in rural areas, constructed of timber framing on short piers. Windows were numerous and often grouped together, to provide for natural light and ventilation. The most common forms feature gable-ends. Most parishes had between three and twelve Rosenwald Schools, while only six parishes had no Rosenwald built.  The highest concentration of Rosenwalds occurred in the northwest corner of the state, in Caddo, Claiborne, Webster, and Bienville Parishes.

This effort began after a site visit with staff from the Claiborne Parish Library, where the former Mt. Olive Rosenwald School was identified and its condition assessed.  Brian Davis, LTHP Executive Director, says, “Since the Louisiana Trust works in all 64 parishes, connecting building owners with the resources to preserve them, it makes sense to incorporate this project into our ongoing efforts to help insure that the buildings and their importance are not completely lost.” Following desegregation, those Rosenwald Schools that were used and maintained as a church, a community center,  or even as a residence stood a better chance of survival.

LTHP has since set up an educational and resource center on lthp.org to gather information and memories about these schools and those who used them.  This online center has additional resources including links to a searchable database and guides from the National Trust for Historic Preservation.  LTHP encourages former students, teachers, their descendants, local libraries, and school boards or others with a connection to a former Rosenwald School to share any photos or information about the building.

If you think there is a former Rosenwald School in your community or parish, visit this site to learn and share more or contact info@lthp.org or 318-267-5220.

Previous Next
Close
Test Caption
Test Description goes like this