Recently one of our members, Joan Garner, reached out about a historic cemetery in her neighborhood.  She has been researching its history and piecing together a timeline of events and activities about this historic final resting ground.  Mysteries have arisen on varying ownership over the years as well as hidden histories of former slave graves.  Read more about its fascinating history below.

If you are interested in participating as a guest blogger, complete this brief guest blog survey form.

The Mystery of the McDonoghville Cemetery 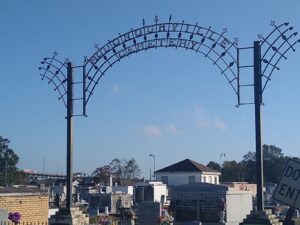 John McDonogh purchased Monplaisir in 1813 and a few years later made it his place of abode (Swanson 1975, 109-110). He established a cemetery to the rear of the plantation for the burial of those that he had enslaved (Ciravolo 2002, 33). McDonogh was buried in this same cemetery in 1850 and was reinterred in his native Baltimore in 1860 prior to the Civil War (Ciravolo 2002, 33). He left a large fortune in his will toward the establishment of schools for “the poor of both sexes, of all classes and castes of color” (McDonogh 1938).

The McDonoghville Cemetery, being a cemetery for those who had been enslaved on McDonogh’s plantation was not of any concern or consideration for the City of New Orleans until it was brought to the attention of the Mayor of the City of New Orleans, Mayor Shakspeare in 1890, primarily due to concerns about John McDonogh’s grave. The committee from McDonoghville stated that “a colored man claims to be the owner of the ground.” “His father, he says belonged to McDonogh, and the cemetery was left to him. The man sells lots in the cemetery but can show no title when called upon to produce it. The citizens propose to trace the matter in the courts and if the ground becomes public property it all will be fenced and kept up. Mayor Shakspeare said that he will shortly visit the cemetery and will see that McDonogh’s tomb is cleaned and maintained in good order (City Hall: The People of McDonoghville Appeal for a McDonogh School and Mayor Shakspeare to Keep the McDonogh Tomb in Order 1890).”

While the citizens recommended that the matter be taken to the courts, I am unaware of any court case to this effect. What is known is that in an article published in 1915 the sexton of the McDonoghville Cemetery, Jacob Dinckel, was interviewed and recounts his first- hand perspective. Dinckel states that he came to that side of the river (Westbank) in 1880. His arrival was a decade prior to the citizens of McDonoghville meeting with Mayor Shakspeare of the City of New Orleans about the McDonoghville Cemetery. In this article published in 1915, Jacob Dinckel recounts a similar accounting concerning the McDonoghville Cemetery, except that his first-hand knowledge as sexton of the cemetery is additionally recorded. Jacob Dinckel states that “After Mr. McDonogh died there was a slave of him left in charge and when she died a son hers was section. Thompson his name. Thompson run it his way. He buried em’ all together, black and white long side each other. When his mother died she had herself put into the old Mr. McDonogh’s tomb and when Thompson died he was goin’ there too” “But that how it was when Mr. McDonogh’s old slaves was section and it went along like that, black and white burying side by side till Mayor Shakspeare come- He ordered them all out! Yes, he made em’ go into a separate place and stay there! They had to go them were his orders (John McDonogh’s Resting Place Whence the Philanthropists Remains Were Removed 1915).”

The prior article does state that Mayor Shakspeare did go to the McDonoghville Cemetery and recounts that there was a former slave that was the sexton of the cemetery. Even though these articles were written 25 years apart there is cohesion in the recounting and the latter article is first- hand knowledge by the sexton of the cemetery. While there are many historical references indicating that the McDonoghville Cemetery was established as a cemetery for those enslaved on McDonogh’s plantation, the historical marker in front of the cemetery mentions that the cemetery is “the final resting place for many prominent local families” yet fails to mention the reason that the cemetery was created or burials of those that were enslaved. 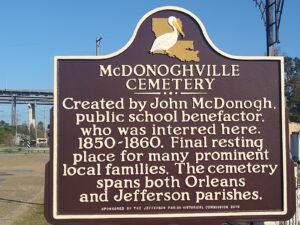 Jacob Dinckel was asked to show where the slave burials were, he makes mention of the colored grave- yard, which is an “army of white wooden headboards (John McDonogh’s Resting Place Whence the Philanthropists Remains Were Removed 1915).” These wooden markers are long- gone and today’s McDonoghville Cemetery is dominated by concrete, marble, granite, and some unmarked mounds. Architecturally, the McDonoghville Cemetery is in keeping with the architecture that characterizes New Orleans cemeteries. I believe that the marker in front the cemetery should acknowledge the burials of those that were enslaved and that the relocation of the burials for segregationist purposes should be addressed by the City of New Orleans, as according to the first-hand account of Sexton Dinckel this was ordered by Mayor Shakspeare.

I find the taking of the McDonoghville Cemetery by the City of Gretna to be questionable if it is true that the title was never formally conveyed to either the Parish of Jefferson or the City of Gretna. This begs the question of which is these is the proper authority for the McDonoghville Cemetery with “full power of control and supervision” and who is the legal owner of the cemetery (Jefferson Parish Police Jury Minutes, 6:141, 170 and 209-10 1891).

What is more is that while the McDonoghville Cemetery appears to be one seamless cemetery to the naked eye, it is in fact, according to the Louisiana Cemetery Board two separate cemeteries (Roberts 2000). The original cemetery is the municipal cemetery whose proper full control and supervision, as well as ownership is questionable, as to whether it is the City of New Orleans, the Parish of Jefferson, the City of Gretna or a combination thereof and the other is a privately owned cemetery in which the creation of that cemetery in the 1970’s is questionable.

Ciravolo, G. Leighton. 2002. The Legacy of John McDonogh. Lafayette: The Center for Louisiana Studies, University of Louisiana at Lafayette.

Times-Picayune (published as The Daily Picayune. 1890. “City Hall: The People of McDonoghville Appeal for a McDonogh School and Mayor Shakspeare to Keep the McDonogh Tomb in Order.” January 17.