Baton Rouge, LA - The state of Louisiana is full of great historic and cultural sites which are celebrated near and far.  Sometimes these historic sites suffer neglect and are threatened to be lost forever, unless there is change.  Since 1999, the Louisiana Trust for Historic Preservation has identified these endangered historic places to advocate for their preservation and protection.

Over 140 sites have been nominated to date – 19 have been lost, 38 have been rehabilitated, the rest remain actively threatened, including this year’s 11 new sites.   Listing these places acknowledges their importance to the local community but also our statewide identity and economy.   The list is generated from nominations made by the public and aims to attract creative approaches and resources to see the sites saved and rehabilitated for future generations.

Selections to Louisiana’s Most Endangered Places List are based on their historic significance; the critical nature of their threat; and the likelihood to bring about a positive resolution to their situation or to those of similar sites.  More information about the program, including nomination form and a complete list of sites may be found at LTHP.org/properties/most-endangered/. 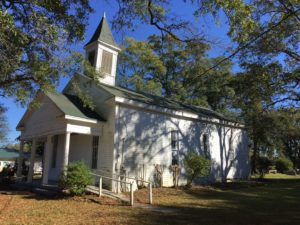 Alto Presbyterian Church (Alto, Richland Parish – 1873) – The Alto Presbyterian Church was founded in 1872 and opened this sanctuary the following year.  This vernacular frame building was constructed with local cypress.  The front porch and additional Sunday School rooms were added during the “gas boom” of the 1920s and 1930s.  Legend has it that the steeple’s brass bell is from the very last steamboat that traversed the Boeuf River.

Inquiries for weddings and events continue to come in, but the church must decline due to the severe structural damage.  Currently, the church only holds service once a quarter. The congregation is working to repair and raise the foundation, improve drainage, rewire for updated safety and efficiency, and make the building a water-tight place to gather again.  The Church has received a $20,000 grant from the D. Thomason Fund of the First Presbyterian Church of Shreveport and continues other fundraising efforts to complete the necessary renovations. 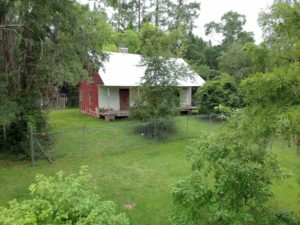 Camp Salmen Lodge (Slidell, St. Tammany Parish – c. 1790) – Located on Bayou Liberty, this building is one of the oldest still standing in St. Tammany Parish.  Although speculated dates of construction range from 1750 to 1830, Joseph Laurent’s ownership of the site included 1809 to 1814.   Laurent used his schooner to transport bricks and lumber across Lake Ponchartrain, to the growing city of New Orleans.  The building was constructed as a residence and later served as a trading post.  The land surrounding the structure became part of the Salmen Brick and Lumber Company in 1901.  This company went on to build nearby railroad tracks, leading to the development of Slidell. 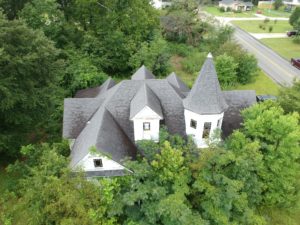 Garland House (Bernice, Union Parish – 1902) – This Queen Anne style home was built circa 1902 and was once the residence to one of the most well-known physicians in northern Louisiana, Dr. D.B. Garland, and his wife, Daisy.  Its most prominent feature is its turret and a mix of roof line gables and dormers.  The property was individually listed on the National Register of Historic Places in 1997 and is located within the newly designated Louisiana Cultural District.  These designations make the property potentially eligible for both state and federal rehabilitation tax credit programs.

The property suffers from neglect and overgrown vegetation.  Local community advocates hope to save and restore the building to help improve the appearance of both the historic house and the community. 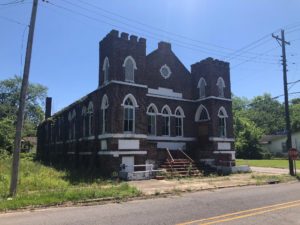 As the congregation grew during the 1920s.  Reverend Thomas A. Levy worked to build a larger sanctuary and dedicated this facility in 1930.  During the 1960s, Greater New Guide Baptist Church became a gathering place where the African-American community met, organized, and created strategies to fight for their Civil Rights.  Membership continued to grow into the 1970s and the congregation relocated to a larger facility.
The building now sits vacant with a leaking roof, rotted window sills, and bio-growth in between bricks and downspouts.  Chez Fab Arts, a local arts non-profit, is hoping to change that and revive this site as a community space for artists and events.  Additional funding and support are needed to help address the conditions of the building before further programming may be developed. 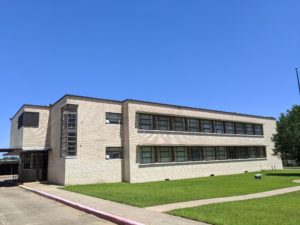 This building is important as an example of early modernism in America, heavily influenced by European design.  This is a result of a trip to Europe in 1931, where he observed the new approach to using materials, light and spatial arrangement in the field of architecture.  His designs following World War II show a marked influence of American interpretation of European design. 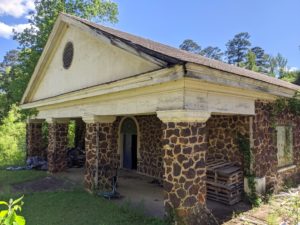 Homer Community Center (Homer, Claiborne Parish – 1939) – The Homer Community Center was built in the mid-1930s by the Works Progress Administration next to a picturesque lake.  It features the popular “National Park Service Rustic” architectural style which used natural materials found throughout the surrounding area. 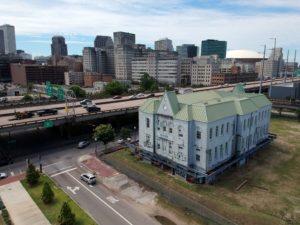 McDonough School No. 11 (New Orleans, Orleans Parish – 1879) – This school was constructed in 1879 as a girl’s grammar school within New Orleans’ Mid-City neighborhood.  It is a classic example of Second Empire style and was designed by famed local architect William A. Freret.  The school was also one of the first schools in New Orleans to desegregate in 1961 and continued to serve students, later becoming the New Orleans Center for Health Careers until Hurricane Katrina struck the region in 2005.

In 2011, McDonough School No. 11 was on the move.  The school was moved multiple times to make room for the University Medical Complex, and it was placed on temporary supports on which it still sits today.  It is highly visible from Interstate 10, where traffic can view open and broken windows, water damage, and other issues due to exposure to the elements and vandalism.  This property has been listed on the New Orleans Nine Most Endangered list twice (2008 before moving and again in 2019).  If current owners, LSU A&M Board of Supervisors, are willing to part with the building, it must be moved again to a permanent location for reconstruction and restoration. 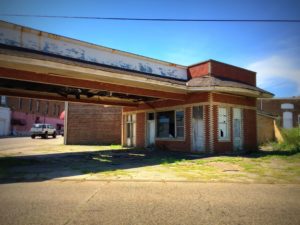 Pan Am Petroleum Corporation Gas Station – (Homer, Claiborne Parish – 1922)  – This building was constructed during the golden era of the automobile and later adapted for a mix of uses, ranging from a dry-cleaning business to a popular burger joint.  It has remained vacant since 1995.  It was one of seven gas stations built in Homer during the early 20th century, but today it remains the sole survivor of this era.

Just one block from the downtown Homer Square, its Arts and Crafts style stands out for its distinct brick color combinations, patterns, and singular column to the porte-cochere.   It is a contributing building to the Homer National Register Historic District, which was created in 1986.  The Homer Historic Commission and Main Street Homer have begun improvements to this site and its neighboring lot. 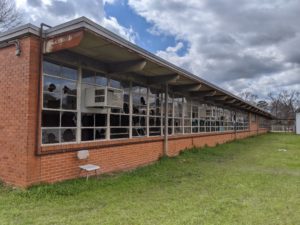 Sabine High School (Many, Sabine Parish – 1957) – The Sabine High School was built in 1957, as a modern campus to educate African American children in Sabine Parish, ranging from kindergarten to 12th grade.  Designed by Shreveport architects, Seymour Van Os and Theodore Flaxman, the campus served as Many Junior High School, after desegregation in 1970. Classes in the facility ceased in 2001 and today, much of the campus’ interior is deteriorating.  In spite of this, the school retains its original character-defining features such as the large expanses of ribbon windows amidst red brick walls.

Sabine High School has a strong, proud alumni network and today local advocates are working to save their school.  The “Exploratory Committee of the 12th District” is working to identify new uses that fit the building complex and the surrounding community such as educational and workforce programming, event and entertainment venue, senior living, or a community center.  Sabine High School was added to the National Register of Historic Places in 2020. 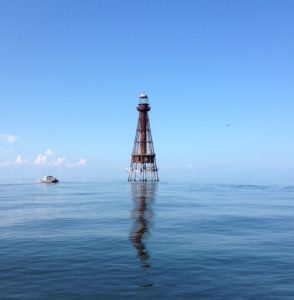 Ship Shoal Lighthouse (Gulf of Mexico, south of St. Mary Parish – 1859) – 55 miles from the coast of Louisiana rests a screw-pile designed lighthouse marking the site a large underwater sand bar.  The state of Louisiana petitioned the federal government in 1848 for a lighthouse.  As a result, the Pleaston Lightship was stationed on the shoal in 1849 until a permanent structure was built a decade later.  The lighthouse showed signs of leaning starting in 1870 and rip-rap and granite blocks were installed to slow the shifting of sand until the light was abandoned in 1965. 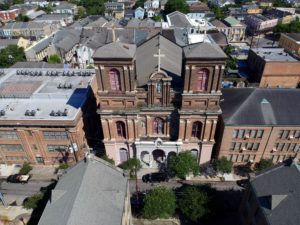 The Friends of St. Alphonsus have been meeting monthly since 1990 to restore this sacred space through grants and fundraisers.  Their work has been limited in recent years as major improvements are needed to keep it a safe and operable space.  Signs of water and termite damage can be found throughout, but especially in timbers supporting the bell tower.  Heavy winds and rain have caused masonry and plaster ceiling pieces to fall.  Conditions continue to worsen and citations for demolition by neglect have been issued.